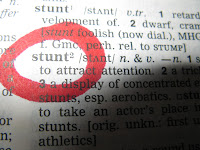 So, here I am, flipping open the dictionary, closing my eyes, and BANG! I point to a word. And that word is . . . stunt, as in stuntman. Switch on the imagination, and let the words flow. Here's what I've come up with . . .

Stefano had a dream. That dream was to become a stuntman. One day, his big chance arrived. A movie was being filmed in town, and there was a call out for people who were interested in taking that first step into a career in the movies.

Stefano waited up all night outside the door of the movie director’s office, desperate to get a part in the movie. As he waited through the night, he dreamed of driving a Porsche at high speed through town, swerving around invading zombies while dodging machine gun fire. Or maybe they’d ask him to wrestle an alligator that had escaped from a zoo and was terrorizing the town. Could it be he’d be shot from a cannon, flying through the air and landing right on top of an escaping bank robber? The possibilities of Stefano’s role in the movie were endless, and he was ready for anything.

Finally, at eight in the morning, the door to the office swung open, and a scruffy looking man in a sweat suit covered in coffee and ketchup stains looked out at Stefano.

“I’m here for a part in the movie!” Stefano shouted, jumping to attention to show his eagerness. “I can do anything! I’m not afraid of fire, loud noises, man-eating animals, or going really fast in a car! I don’t even mind jumping from trains or being shot from a cannon!”

“Have you done any of that stuff?” the man said, looking quizzically at Stefano as he rubbed the stubble on his chin.

“Well . . . not exactly,” Stefano replied. “I mean, I have ridden my bike really fast, and I’ve jumped from an awful lot of swings in my recess career. I figure those experiences have really prepared me for a career as a stuntman.”

“Is that so?” the man replied. “Well, the role we’re looking to fill in our movie isn’t exactly that dangerous, I’m afraid.”

Stefano spent the rest of the day on the set of the movie dressed up as a giant ice cream cone. The movie’s director gave Stefano only two instructions– “Just stand there! Don’t move!”

Stefano’s first job as a movie stuntman wasn’t exactly thrilling. Even worse, Stefano was allergic to the giant ice cream cone costume. When he took it off at the end of the day, he was covered in strange purple dots.

But even worse, the director decided to cut the scene with the giant ice cream cone from the movie. The whole experience was one great big disappointment for Stefano. As a result, he decided not to become a stuntman.

“I want something with more danger!” he declared. “Something where I’m risking my life!”

So if any of you hear of someone looking for a lion tamer, please give Stefano a call. He’s busy in his backyard practicing with his tabby cat named Snickers.

Posted by Chris McMahen at 8:38 PM

Chris McMahen
Armstrong, British Columbia, Canada
When not wandering about, hopelessly lost, I live in British Columbia’s Spallumcheen Valley, only a short bike ride away from the small city of Armstrong. I am proud to be the self-proclaimed holder of the title, “Worst Ex-recreational Hockey Player in Canada.” I used my many years of on-ice futility as primary research for my 2007 novel Klutzhood (http://www.orcabook.com). I have also spun a lifelong fascination with tabloid newspapers into a novel for young readers–Tabloidology (http://www.orcabook.com). My first novel, published in 1996, was the cult classic Buddy Concrackle’s Amazing Adventure (Coteau Books), although I’m not exactly sure which cult thinks it’s a classic. Published in the Fall of 2011 is my fourth novel, Box of Shocks. When I’m not huddled over a keyboard or pad of paper writing, I can often be found in one of many places. I may be cycling the back roads or trails of the Spallumcheen Valley, lost somewhere on a ski trail, or in an elementary school in Armstrong where I work as a teacher-librarian and classroom teacher.